The content of this article is cloned from PCWorld/IDG. The dead links from the original article has been removed (and replaced with only the text on the link). The only link that worked was “The 25 Greatest PCs of All Time” (the Amiga is on page 8).

Twenty-five years ago, Commodore released a revolutionary multimedia machine. We take a peek inside this classic computer to see what made the Amiga so amazing. 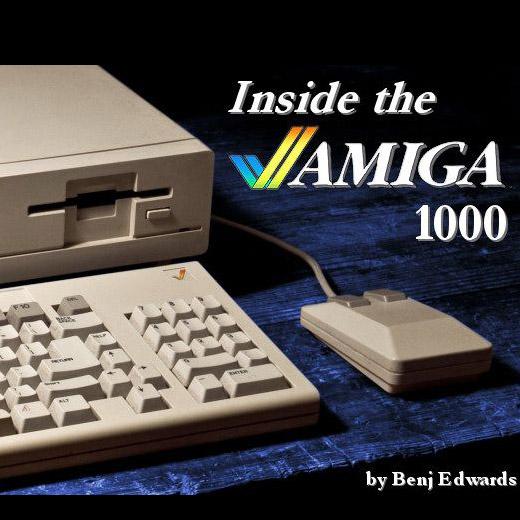 In July 1985, Commodore released an impressive new multimedia PC called the Amiga. This system, once the object of a legal fight between Atari and Commodore, made waves in the press with its high-resolution color graphics and stereo sound. The Amiga supported 32 colors on screen simultaneously (from a lush palette of 4096), at a time when IBM PCs supported only four colors and the Macintosh supported just two (white and black). The Amiga also shipped with a multitasking user interface that arguably rivaled Mac OS in power and flexibility.

Join me as I take apart this legendary machine to see what made the Amiga unique in the computer world. 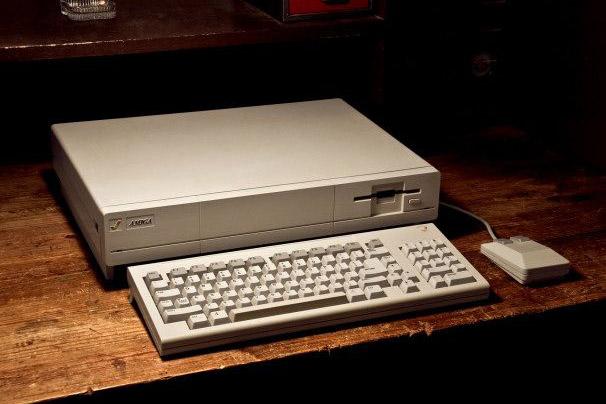 Commodore’s first member of the Amiga line, shown here, launched for US$1295 with a base unit, a keyboard, and a mouse. The base unit included 256KB RAM and an 880KB floppy drive. This system shipped under the sole name “Amiga” at first, but Commodore rechristened the machine the Amiga 1000 after the launch of the Amiga 500 in 1987. 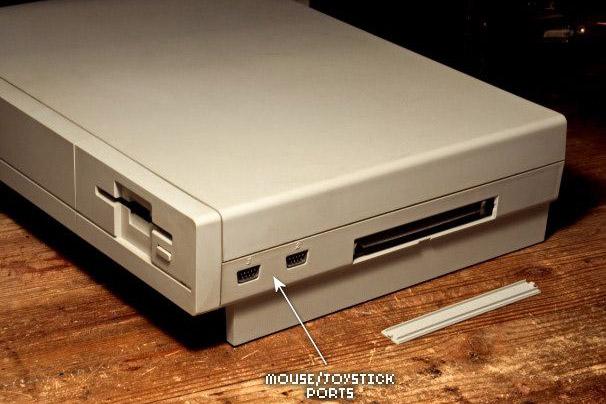 The Amiga shipped with two user ports that could accept mice, joysticks, or other pointing devices. To the right of those, you can see the Amiga’s only official means of expansion: a bus slot that allowed complex add-on accessories such as third-party RAM upgrades, SCSI controllers, real-time clocks, and even an IBM-compatible expansion box. 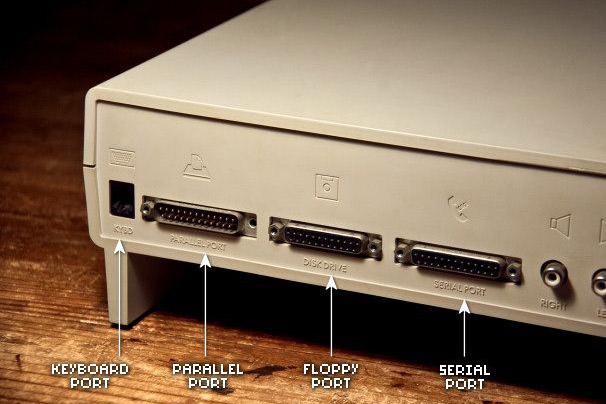 Here you can see the left half of the Amiga’s rear panel, which contains a nice array of ports. The Amiga’s responsive and well-designed detachable keyboard tucked under the bottom of the unit when not in use, and it plugged into the socket here via a phone cable. The parallel port typically hosted a printer, the serial port usually connected to a modem, and the floppy port allowed the Amiga to use a second (external) floppy drive. 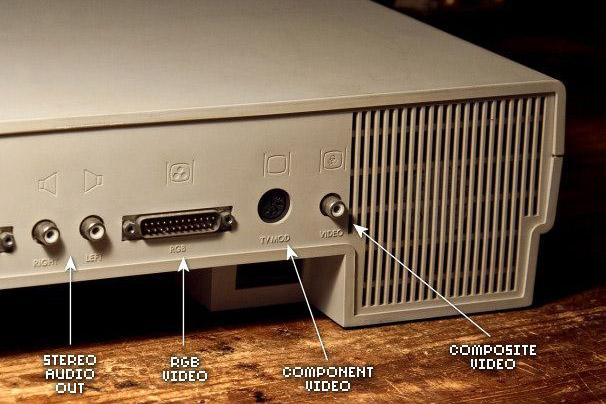 Here you can see the ports that made the Amiga a multimedia powerhouse: stereo audio outputs and three separate video-output connectors that increase in display quality from right to left.

Whereas the Atari ST line found its niche in audio thanks to its MIDI ports, the Amiga specialized in live video production. Recognizing the Amiga’s graphical capabilities, numerous TV studios used the Amiga and its successors to generate on-air weather maps, station logos, captions, and other on-screen text for live newscasts well into the late 1990s. 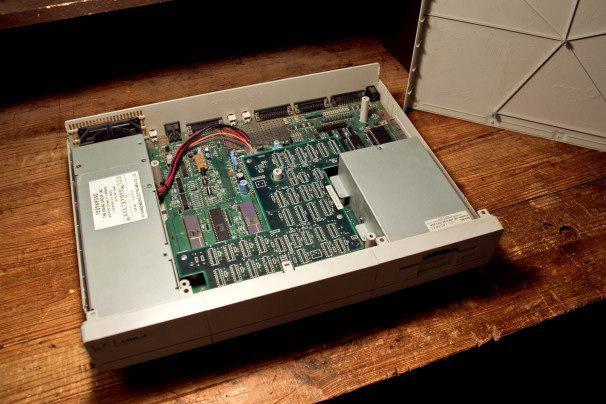 Now it’s time to take this unit apart. After undoing a few screws on the bottom, I’ve removed the lid and set aside the metal RF shielding, giving us our first view inside the chassis. A long, bricklike power supply dominates the left side of the case, while the floppy drive sits on the right. However, the green stuff is where all the action is. 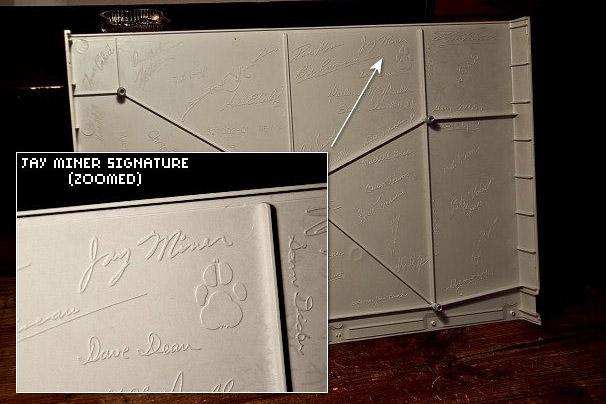 Like the creators of the original Macintosh, the team who designed the Amiga signed the molding used to cast the top half of the computer’s plastic case. As a result, the names of everyone involved are permanently embossed within every Amiga 1000 shipped. Most prominent is the signature of Jay Miner — the father of the Amiga — and the paw print of his dog Mitchy. 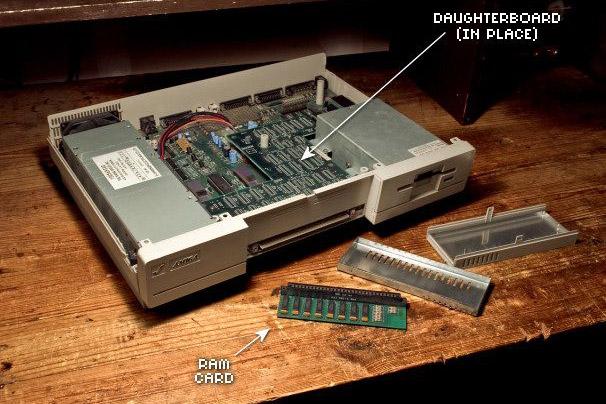 Commodore designed the Amiga to accept a user-installed 256KB RAM module, shown here, to raise the system memory to 512KB. It plugged into the front of the computer under a removable plastic panel. With third party add-ons (usually connected to the external expansion bus shown earlier), a user could bring the Amiga’s RAM up to 8MB. 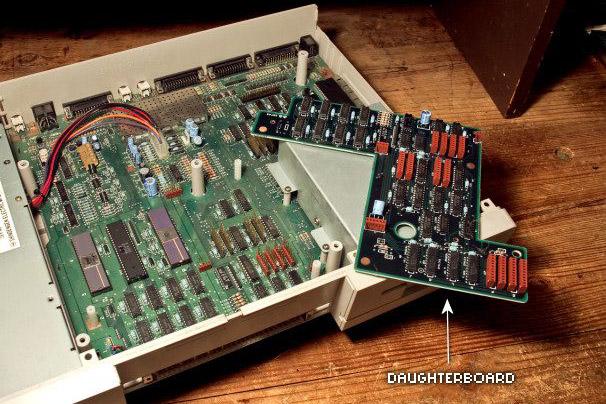 When it came time to ship the Amiga in 1985, Commodore engineers found the OS too buggy to include on built-in ROM chips in the computer. (And that’s too bad, because it would have allowed the Amiga to boot instantly just as other early PCs did.) Instead, the engineers devised a workaround called the “Writable Control Store” (WCS) that fit on a daughterboard attached to the motherboard via long multipin headers where chips would normally reside. The WCS included 256KB of memory used specifically to hold a basic OS that had to be loaded from a floppy disk at boot time. 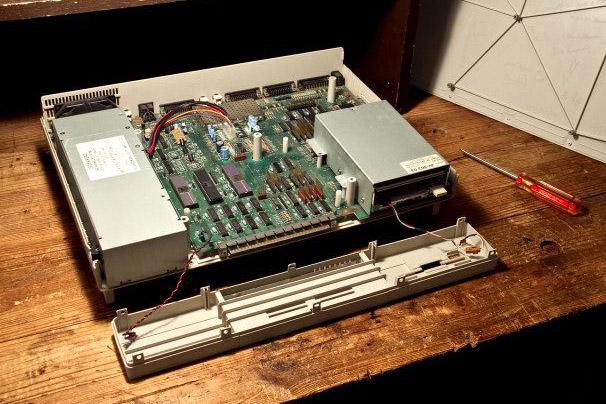 With the daughterboard set aside, I’ve now removed the front bezel of the case, getting one step closer to the ultimate goal: complete Amiga dismemberment. 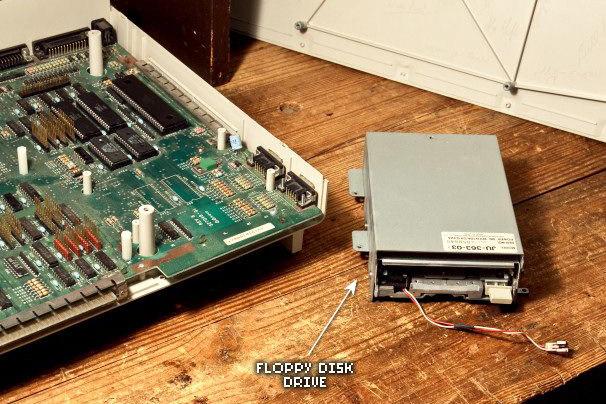 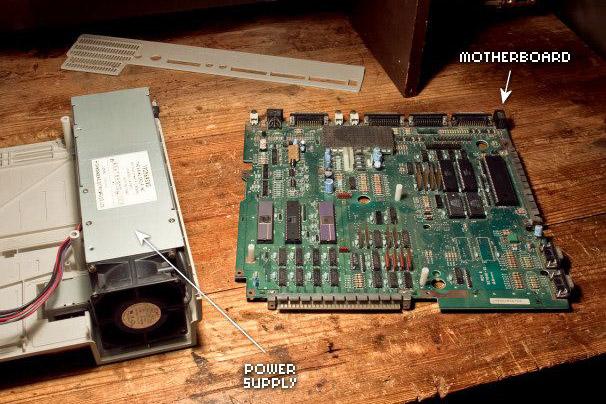 Here I’ve removed the motherboard from the case and set it aside. The motherboard contains all of the circuitry that truly makes the Amiga function. To the left, you can see the Amiga’s power supply sitting in the lower half of the case. 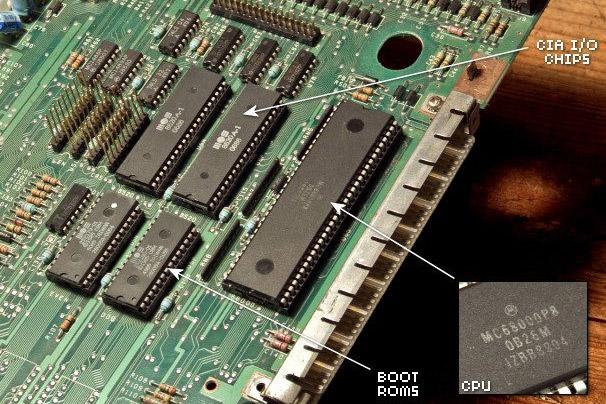 On one side of the motherboard sits the Amiga’s 16/32-bit Motorola 68000 processor, which ran at a relatively speedy 8MHz. To its left sits a pair of MOS 8520 CIA chips that handle serial and parallel communications for the computer. Below those are the Amiga’s bootstrap ROMs, which contain the firmware that tells the computer how to load a complete operating system from a floppy disk. 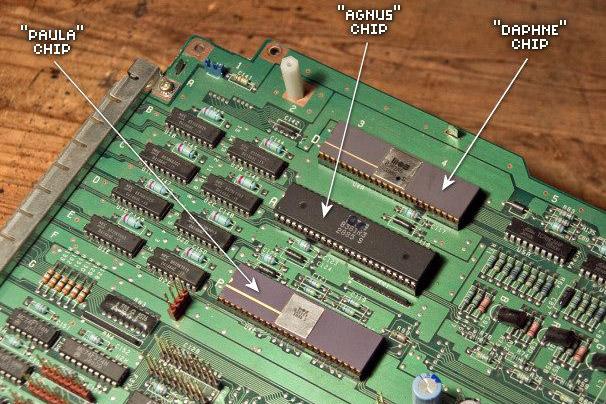 The secret sauce of the Amiga is in its custom-designed coprocessing chipset, visible here in the form of three chips with female nicknames. “Paula” handles the computer’s sound and controls the floppy drive. “Agnus” performs fancy memory-management magic and a few graphical coprocessor functions. “Daphne” is an early version of a later, more common chip named “Denise” that generates most of the Amiga 1000’s impressive graphical output. Together, these chips form the heart and soul of a powerful computer that, while quickly surpassed by IBM PC clones in the market, was far ahead of its time. Legions of loyal Amiga fans still cherish the machine today.